Today, Paradox Interactive announced its latest expansion for Crusader Kings II, its hit medieval grand strategy role-playing game, Monks and Mystics. The expansion is said to players to further explore the religious aspect with new mechanics and character associations that “can tie a faith closer together, or render it asunder.”

The major feature of Monks and Mystics is the additions of Societies (secret or otherwise). Characters will be able to join monastic orders, secret cults, and Gnostic heresies. As a society gains members, it gains power and prestige for its leaders. As you would expect, societies open new actions for characters, and can lead you down new event paths.

Here’s a more detailed rundown of everything the expansion will feature, courtesy of Paradox:

A release, nor a price point was divulged. Crusader Kings II is currently available on PC. Below you can check out the expansion’s announcement trailer: 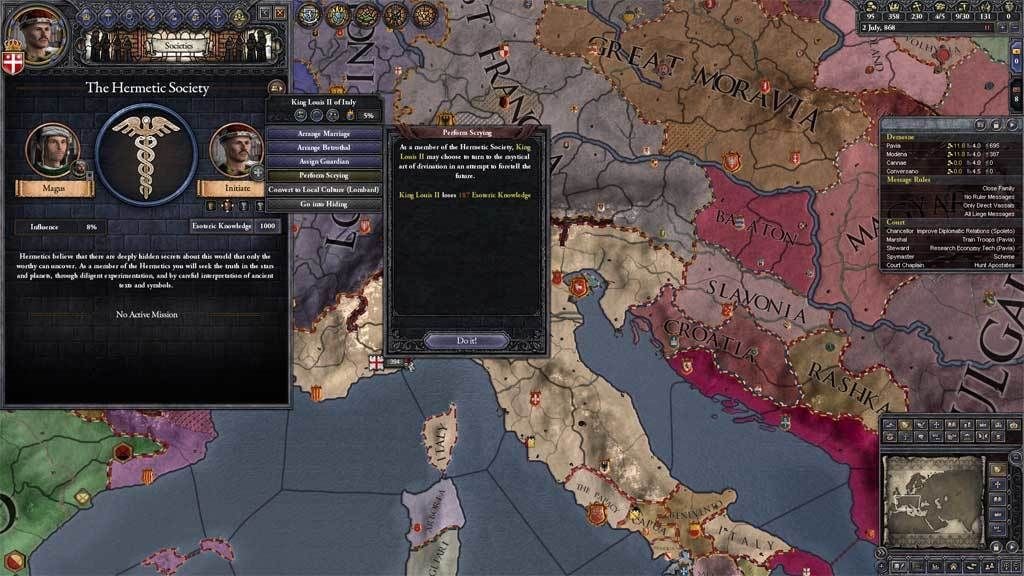 For those that don’t know: Crusader Kings II is a grand strategy game set in the Middle Ages that released back in February of 2012. The game has been Paradox’s second most successful release to date, after only Cities: Skylines, with over 1 million copies sold. The game is essentially the closet you can come to playing a true Game of Thrones style game, especially if you activate the Game of Thrones mod.

Monks and Mystics specifically is the game’s newest expansion. In the add-on, your ruler has the chance to join religious societies to improve their standing with both humankind and God (or the gods). You can join a monastic order and pursue traditional virtues and learning, or seek out the kind of knowledge only available to those skilled in alchemy and astrology. More of a cult guy? No problem, as with this expansion you can also join underground religious cults to weaken the church or to pray to elemental forces of darkness to unlock new and terrible powers.

Here’s an overview of the expansion via Paradox:

For centuries, the abbeys of Europe have had a sacred mission – to keep the flame of holy knowledge burning through an era of strife and to keep the secular powers on a righteous path. To the east, a mysterious new sect seeks out those who stray from the Prophet’s path, using not-so-gentle means to remind the impious of the power of God. And, in the shadows, alchemists and religious usurpers challenge the current order. Rumors of dark sacrifices are whispered in taverns throughout the known world.

Welcome to the world of Monks and Mystics.

In Monks and Mystics, your characters can follow new paths in their search for religious enlightenment and holy blessing, joining sacred societies or secret brotherhoods that open new opportunities for role-playing and story-telling in one of the most popular historical strategy games ever made.

Below, you can check out the new launch trailer: